2: Three years thinking about this one 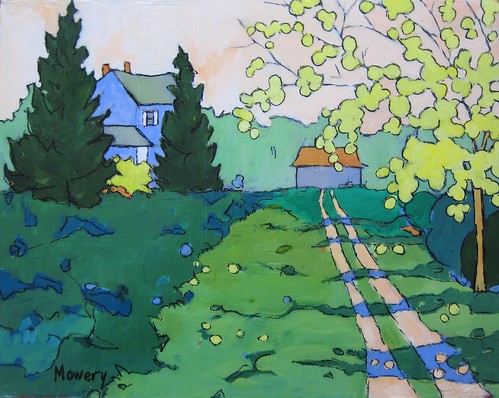 Dave lives along the highway in Snow Hill, Maryland. I was a little nervous when he marched toward my car. But he wanted me to pull my car into the driveway, so I would not get clobbered by a chicken truck. He was pretty proud of the fact that the old house frequently attracts artists.

A friend said to me, "Such a nice story," and I told her, "Oh, that's not the story of this painting."

Dave is a tall, thin man with his long hair tied in a low, uncombed ponytail. He walked up shirtless in his Levis and work boots to give me fair warning that he was about to do some target shooting out behind the house. He didn't want me to hear gunfire and freak out. I remain grateful to him for having the forethought to leave his rifle on the porch before coming to talk to me. If I'd seen an armed property owner coming at me while plein air painting...then this would be the story of how I soiled myself and drove like a bat outta hell.